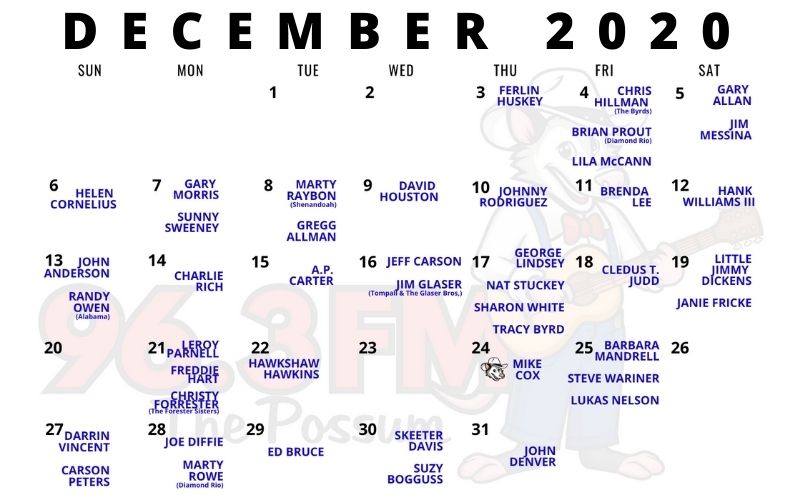 A 12-minute motion picture, The Great Train Robbery, made its debut in 1903. It’s the first western feature in history.

Gene Autry began a stint on WLS Radio in Chicago in 1931, with his own show Conqueror Record Time. He remained with the station three years before moving to California.

Uncle Dave Macon’s career was commemorated in 1954 with a marker on U.S. Highway 70, near Woodbury, TN.

Fred Rose died in Nashville of a heart attack in 1954. Rose founded Acuff-Rose Publishing with Roy Acuff and wrote masterpieces like Blue Eyes Crying In The Rain. He was one of the first inductees in the Country Music Hall of Fame and Nashville Songwriters Hall of Fame.

Buck Owens recorded two mega hits on the same day in 1964… I’ve Got A Tiger By The Tail and Cryin’ Time in an afternoon session at the Capitol Recording Studios in Hollywood.

A year later in 1965, Merle Haggard & The Strangers were in the same Capitol Recording Studios in Hollywood to record Swinging Doors.

Dolly Parton re-signed with RCA Records in a 1972 deal that required her to record at least 25 songs annually for the next five years. Duet partner Porter Wagoner was specified in the contract as her producer.

Marty Robbins performed what would be his last concert in 1982 in Cincinnati.

Chattahoochee became Alan Jackson’s first gold single in 1993, while his album A Lot About Livin’ (And A Little ‘Bout Love) goes triple-platinum.

Wynonna and Naomi Judd held a press conference at Nashville’s Gaylord Entertainment Center in 1999 to announce they’ll go on a reunion tour in 2000. Explaining the timing, Naomi quips, “I’m not dead, and she’s not pregnant!”

Songwriter Aaron Schroeder died in Englewood, NJ in 2009. Among his credits: Elvis Presley’s A Big Hunk O’ Love and It’s Now Or Never, Billy “Crash” Craddock’s I’m Gonna Knock On Your Door and Johnny Duncan’s She Can Put Her Shoes Under My Bed (Anytime).

Gabe Tucker was born in Pierce, KY in 1915. He played bass and trumpet on Eddy Arnold’s first recording session in 1944, which yielded the country hit Each Minute Seems A Million Years.

Slim Willet was born in Victor, TX in 1919. He wrote Don’t Let The Stars Get In Your Eyes, which became his only hit in 1952, alongside concurrent hit versions by Skeets McDonald, Ray Price and Red Foley.

Singer-comedian Jim Nesbitt was born in Bishopville, SC in 1931. He earned several novelty hits in the early-1960s, including Please Mr. Kennedy, with a melody borrowed from The Ballad Of Davey Crockett; and his only Top 10 single, Looking For More In ’64.


Jim Chesnut was born in Midland, TX in 1944. After working as a disc jockey and an associate of Bonanza star Dan Blocker, he developed a series of minor country hits in the 1970s, topped by his 1979 single Let’s Take The Time To Fall In Love Again.


Singer/songwriter Kim Richey was born in Zanesville, OH in 1957. Her credits include Radney Foster’s Nobody Wins and Trisha Yearwood’s Believe Me Baby (I Lied).

Darryl Ellis Gatlin was born in Norfolk, VA in 1964. He’s the older half of Darryl & Don Ellis, who scored a recording contract with Epic Records in the 1990s, gaining a nomination from the Country Music Association in 1993 for Vocal Duo of the Year.