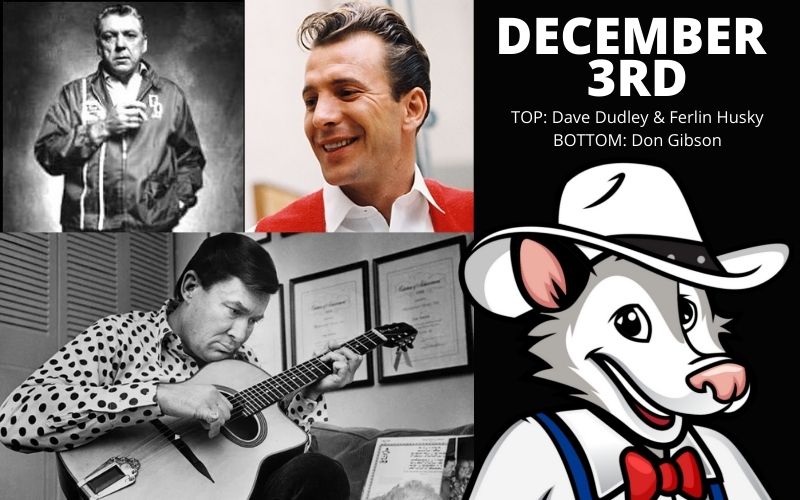 In his second stab at the song, Webb Pierce recorded Jimmie Rodgers’ In The Jailhouse Now at the Castle Studio in Nashville’s Tulane Hotel in 1954.

Don Gibson recorded two songs he wrote in the same day – on the same day…I Can’t Stop Loving You and Oh Lonesome Me. The songs were recorded in a morning session at RCA Studio B in Nashville in 1957.

Dave Dudley was hit by a car in 1960. He invested the $14,000 he received from the insurance company to record Six Days On The Road.

That same day in 1960, Buck Owens was at the Capitol Recording Studios in LA to record Foolin’ Around and Nobody’s Fool But Yours.

The Rolling Stones’ Keith Richards was electrocuted on stage in Sacramento in 1965. It would take seven minutes to revive him when his guitar touched the microphone.

Dolly Parton’s Here You Come Again began a five-week ride at #1 in Billboard on this date in 1977.

Anne Murray got some good news on December 3rd in 1983. Her song, A Little Good News made it to #1 on the Billboard country singles chart.

Guitarist Grady Martin died from congestive heart failure at the Marshall Medical Center in Lewisburg, TN in 2001. Martin was one of Nashville’s most-used session players. You can hear his work on hits by Patsy Cline, Willie Nelson, Merle Haggard, Loretta Lynn, Ray Price and others.

Rabon Delmore was born in Elkmont, AL in 1916. With older sibling Alton Delmore, The Delmore Brothers became a leading duo in the 1930s, with their mix of country and blues leading to a 2001 induction in the Country Music Hall of Fame.

Hubert Long was born in Poteet, TX in 1923. He emerged among country music’s most influential executives, working with the likes of Eddy Arnold, Webb Pierce and Faron Young on his way to membership in the Country Music Hall of Fame in 1970.

Ferlin Husky was born in Flat River, MO in 1927. His 1956 single Gone established the Nashville Sound. He also created a landmark with the gospel-themed Wings Of A Dove and entered the Country Music Hall of Fame in 2010.

Singer/songwriter Roger Bowling was born in Harlan, KY in 1944. He wrote the Kenny Rogers hits Lucille and Coward Of The County, plus Billie Jo Spears’ Blanket On The Ground and George Jones & Tammy Wynette’s Southern California.