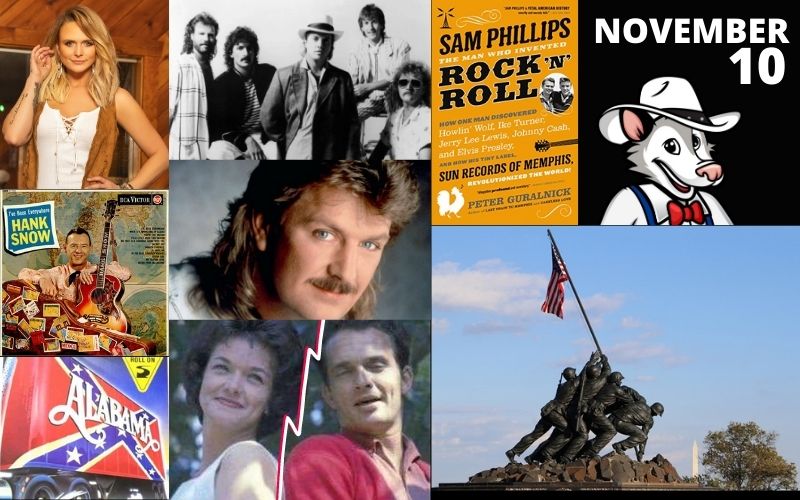 Ernest “Pop” Stoneman married Hattie Frost at the Methodist Church in Galax, VA in 1918. Many of their children unite under Pop’s lead to form The Stoneman Family.

Buddy Holly made his first recording in 1953, playing guitar as one-half of Buddy & Jack at the studios at country radio station KDAV in Lubbock, TX. Holly becomes the first to produce a session for Waylon Jennings.

The Iwo Jima Memorial–the world’s largest bronze statue–was dedicated in Washington, D.C. in 1954. Attending is Ira Hayes, one of the flag bearers depicted in the monument. He died two months later, inspiring the Johnny Cash hit The Ballad Of Ira Hayes.

Roy Drusky signed with Columbia Records in 1955, his second stint with a label. He had four sessions over the next two years but failed to connect commercially.

Stonewall Jackson and The Wilburn Brothers joined the Grand Ole Opry in 1956.

Marty Robbins took over the #1 position on Billboard’s country singles chart with Singing The Blues in 1956.

Johnny Horton recorded When It’s Springtime In Alaska (It’s Thirty Below) during the evening at the Bradley Film & Recording Studio in Nashville in 1958.

Jim Reeves recorded When Two Worlds Collide, I Won’t Forget You and Blue Side Of Lonesome during the evening at RCA’s Nashville studio in 1961.

No, Johnny Cash wasn’t the first to sing it: Hank Snow went to #1 on the Billboard country singles chart with I’ve Been Everywhere in 1962.

The Byrds signed to Columbia Records in 1964. The country rock pioneers were recommended by Miles Davis.

R&B songwriter Raymond Jackson died in 1972 from burns suffered when he tried to kill a rat by dousing a hole in his yard with gasoline. Two of his songs become country hits: (If Loving You Is Wrong) I Don’t Want To Be Right and Touch A Hand, Make A Friend.

David “Stringbean” Akeman and his wife, Estelle, were murdered in their Ridgetop, TN home after a Grand Ole Opry performance in 1973. They surprised burglars who left their bodies to be discovered by Grandpa Jones.

Bonnie Owens filed for divorce from Merle Haggard in 1976.

United Artists released the Crystal Gayle single Why Have You Left The One You Left Me For in 1978.

Johnny Cash recorded the first of two songs for a bluegrass album by mandolin player Curly Seckler in 1979. The sessions were produced by Cash’s son-in-law, and future band member, Marty Stuart.

Reba McEntire recorded Can’t Even Get The Blues in 1981.

John Schneider earned a #1 country single with I’ve Been Around Enough To Know in 1984.

MTM released the Schuyler, Knobloch & Overstreet single Baby’s Got A New Baby in 1986.

Joe Diffie got his first #1 country single with Home in 1990.

Capitol released Sawyer Brown’s All These Years in 1992.

During a week of celebrity competition in 1994, Kathy Mattea beat Melrose Place star Doug Savant and The Bold And The Beautiful‘s Michael Sabatino on Jeopardy, winning $10,000 for the American Foundation for AIDS Research.

Fiddler Curly Fox died at the Rhea County Medical Center in Graysville, TN in 1995. He joined Texas Ruby to form one of country’s most successful husband-and-wife teams in the mid-20th century, prior to her death in a trailer fire in 1963.

Dolly Parton is awarded a National Medal of Arts by president George W. Bush at the White House in Washington, D.C. in 2005. Among others honored at the same event are Wynton Marsalis and Robert Duvall

Johnny Cash’s 1950s home, located at 5676 Walnut Grove Place in Memphis, went up for sale via auction on eBay in 2006. He lived there after leaving the Air Force and Arkansas with his then wife, Vivian. While living here, he was still trying to make it as a musician, but helped pay the bills by working as a door-to-door sales man.

Miranda Lambert won three trophies on her birthday in 2010. –Female Vocalist of the Year; Album, for Revolution; and Music Video, for The House That Built Me–during the 44th annual Country Music Association awards at Nashville’s Bridgestone Arena.

Little, Brown And Company published Sam Phillips: The Man Who Invented Rock ‘N’ Roll, in 2015. The biography of the Sun Records founder was written by Peter Guralnick.

Record producer Paul Cohen was born in Chicago, IL in 1908. In 1934, he joined Decca Records, where the label signs such acts as Ernest Tubb, Webb Pierce and Patsy Cline, earning him a 1976 entry into the Country Music Hall of Fame.

Bass player Bill Bryson was born in 1946. He joined The Desert Rose Band, a jangly California act that yielded a string of breezy, harmony-laden singles on its way to three Academy of Country Music awards during its tenure, 1986-1994.

Songwriter Dave Loggins was born in Mountain City, TN in 1947. Probably best known for Please Come to Boston, he had success in country music as he joined Anne Murray on Nobody Loves Me Like You Do. His writing credits include Alabama’s Forty Hour Week (For A Livin’), Wynonna’s She Is His Only Need, Gary Morris’ I’ll Never Stop Loving You and Restless Heart’s Fast Movin’ Train.

Songwriter Hugh Moffatt was born in Fort Worth, TX in 1948. His credits include Ronnie Milsap’s Just In Case, Johnny Rodriguez’s How Could I Love Her So Much and Dolly Parton’s Old Flames Can’t Hold A Candle To You.

Yvonne Vaughn was born in Mount Airy, NC in 1949. We know her better as Donna Fargo. She became a significant singer/songwriter during the 1970s, earning back-to-back million-sellers with The Happiest Girl In The Whole U.S.A. and Funny Face.

Steel player Greg Trostal was born in Elmira, NY in 1950. He replaced Pat Severs in Pirates Of The Mississippi in 1994.

Speaking of Pat Severs, he was also born on November 10in Camden, SC in 1952. As a member of Pirates Of The Mississippi, he plays on the 1991 hit Feed Jake.

Chris Cagle was born in De Ridder, LA in 1968. Following his national arrival in 2000, he fashions a number of hits around a tumultuous personal life, earning a Top New Artist nomination from the Academy of Country Music.

Miranda Lambert was born in Longview, TX in 1983. Introduced on TV’s Nashville Star, she combines a feisty attitude and deep sensitivity while winning the Country Music Association’s Female Vocalist of the Year five times in a row from 2010-2014.