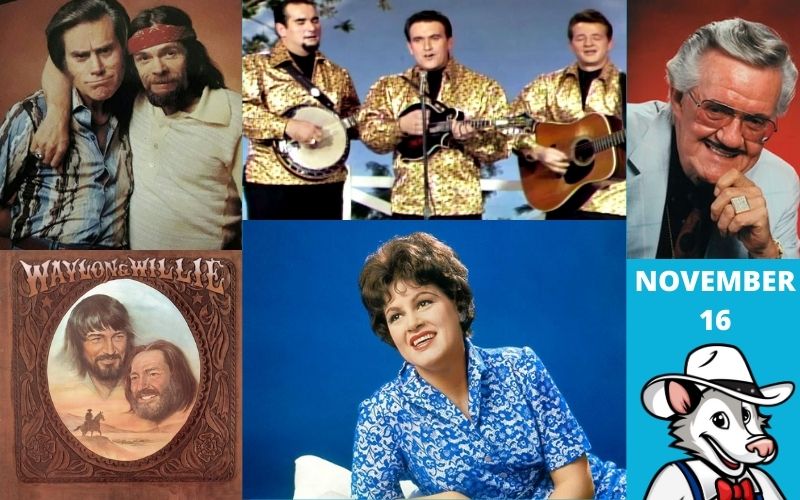 Patsy Cline recorded I Fall To Pieces during an afternoon session at the Bradley Film & Recording Studio in Nashville in 1960.

Bobby Bare saw Waylon Jennings perform at J.D.s in Phoenix in 1964. The next day, on his way to Las Vegas, Bare called Chet Atkins and urged him to sign Jennings.

Waylon Jennings & Willie Nelson recorded Mammas, Don’t Let Your Babies Grow Up To Be Cowboys at the American Studios in Nashville in 1977.

George Jones & Johnny Paycheck recorded You Can Have Her during an afternoon session at the Columbia Studios in Nashville in 1978.

Garth Brooks’ interpretation of the Billy Joel song Shameless rises to #1 on the Billboard country chart in 1991.

J.D. Sumner, the bass singer with gospel music’s Stamps Quartet, died of a heart attack in a Myrtle Beach, SC hotel room in 1998. He performed on such Elvis Presley hits as Burning Love, Moody Blue and Way Down.

Earl Bolick was born in Hickory, NC in 1919. Along with older brother Bill, he created The Blue Sky Boys, whose country ballads and gospel tunes use strong genetic harmonies during the height of their career, from 1935 until semi-retirement in 1951.

Songwriter Troy Seals was born in Big Hill, KY in 1938. His credits include Eddy Raven’s Joe Knows How To Live, Conway Twitty’s Don’t Take It Away, George Jones’ Who’s Gonna Fill Their Shoes and John Schneider’s Country Girls, among others

Pop songwriter Dan Penn was born in Vernon, AL in 1941. He landed songs on the country chart when Barbara Mandrell covers Do Right Woman – Do Right Man and Ronnie Milsap records I Hate You.

Songwriter/producer Robert John “Mutt” Lange was born in Mufilira, Rhodesia in 1948. Noted for his work with AC/DC, Foreigner and Def Leppard, he married Shania Twain and helped her write and develop some of the best-selling albums in country music history. You can hear “Mutt” harmonizing with his former wife on all her major hits. Listen for him here:

Songwriter and bluegrass musician Larry Cordle was born in Cordell, KY in 1949. He penned Ricky Skaggs’ Highway 40 Blues, Diamond Rio’s Mama Don’t Forget To Pray For Me and George Strait & Alan Jackson’s Murder On Music Row, among others.