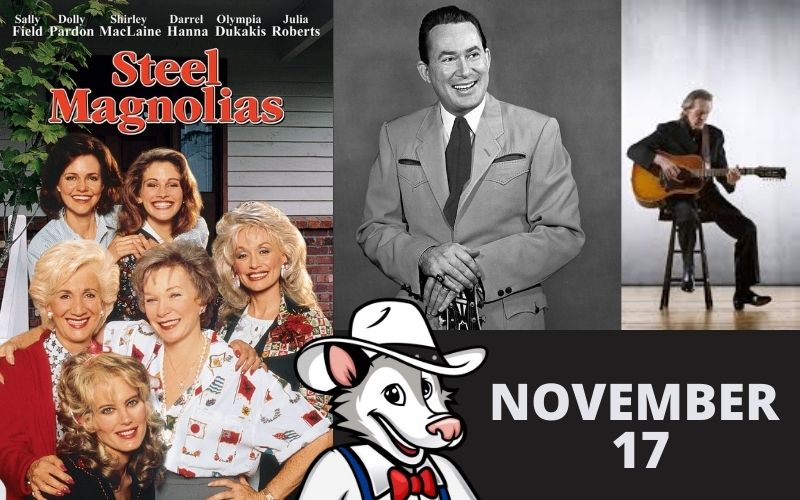 Guitarist Henry Whitter died in Morganton, NC in 1941. One of country music’s recording pioneers, his version of The Wreck On The Southern Old 97 inspired Vernon Dalhart’s million-selling recording of the song.

Opry House Matinee debuted on the Mutual Broadcasting Network in 1945. The program was hosted by Ernest Tubb and Eddy Arnold.

The city of Atlanta observed Faron Young Day in 1954.

Decca released Bill Anderson’s first hit, That’s What It’s Like To Be Lonesome in 1958.

One day after he saw Waylon Jennings perform at J.D.s in Phoenix in 1964, Bobby Bare called Chet Atkins, while headed to Las Vegas, and urged him to sign Jennings to RCA. Atkins didn’t pursue it until Duane Eddy placed a similar call a few weeks later. Proving what a small world it really is, Waylon would go on to marry Duane Eddy’s ex-wife, Jessi.

The Statler Brothers record the nostalgic Do You Remember These during the afternoon at the Mercury Studio in Nashville in 1971.

MCA released Conway Twitty’s This Time I’ve Hurt Her More Than She Loves Me in 1975. The song destined to become a hit was written by Earl Thomas Conley.

We lost Singer/songwriter Don Gibson in 2003. Best known for writing classics as I Can’t Stop Loving You, Sweet Dreams and Oh Lonesome Me, he joined the Country Music Hall of Fame in 2001.

Proving he wasn’t a one trick pony, Kenny Rogers received a Lifetime Achievement Award from the International Photography Hall of Fame and Museum in St. Louis in 2017. Read more about Kenny’s photography here.

Record executive Bruce Hinton was born in Tell City, IN in 1936. Hinton became the head of MCA Records beginning in 1989, overseeing the careers of George Strait, Trisha Yearwood, Vince Gill, Reba McEntire, The Mavericks and others.

Guitarist Gerry McGee was born in Eunice, LA in 1937. Following a stint with the ’60s instrumental group The Ventures, he appeared as a supporting musician on country hits by Emmylou Harris and Rosanne Cash.

Gordon Lightfoot was born in Orillia, Ontario in 1938. The pop singer/songwriter crosses into the country charts with his million-selling 1974 single Sundown. He also wrote Marty Robbins’ Ribbon Of Darkness and George Hamilton IV’s Early Morning Rain.

Gene Clark was born in Tipton, MO in 1941. He became a founding member of The Byrds, a pioneering group in the development of country-rock.

Bass player Reid Perry was born in Jackson, MS in 1988. He is one-third of The Band Perry. The group with local ties won Country Music Association’s New Artist of the Year in 2011. Here is The Band Perry with a remarkable cover of Glen Campbell’s hit, Gentle On My Mind.