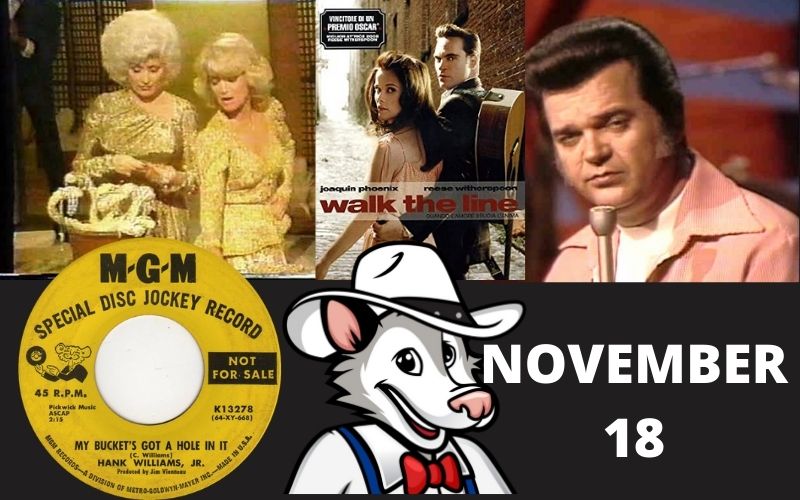 The Louvin Brothers held their first recording session, for Apollo Records, at Nashville’s Castle Studio in the Tulane Hotel in 1947.

MGM released Hank Williams’ My Bucket’s Got A Hole In It in 1949. Lurking on the B side: the classic I’m So Lonesome I Could Cry.

Conway Twitty recorded Hello Darlin’ during an afternoon session at Bradley’s Barn in Mt. Juliet, TN in 1969. It would go on to become his 4th #1 hit and his standard concert opener for the rest of his career.

A few years later in 1974, Conway Twitty was back at Bradley’s Barn to record another #1 hit (his 16th) After All The Good Is Gone.

Janie Fricke recorded a remake of Please Help Me, I’m Falling (In Love With You) in an afternoon session at Columbia Studio B in Nashville in 1977. Her version made it to #12 on the country charts.

Barbara Mandrell And The Mandrell Sisters debuted on NBC-TV in 1980. Guests included Dolly Parton and John Schneider. Dolly was on the show to promote her new album, 9 To 5 And Odd Jobs which was released by RCA that same day so naturally she sang 9 To 5. Dolly also sang with Barbara on The Beatles’ Can’t Buy Me Love.

Columbia released Ray Charles’ Born To Love Me in 1982. It was the first single by the R&B legend issued under a country recording contract.

Alison Krauss rode in the Santa Train in 2006. The CSX charity ride distributes 15 tons of toys in 14 towns throughout Appalachia.

Steel guitarist John Hughey died of a heart ailment in 2007. He played on hits by Conway Twitty, Vince Gill, Dolly Parton and Barbara Mandrell, among others.

Songwriter Johnny Mercer was born in Savannah, GA in 1909. In addition to writing such classics as Moon River and Jeepers Creepers, he co-founds Capitol Records, crucial in the careers of Merle Haggard, Glen Campbell, Buck Owens and Garth Brooks and many others.

Jacky Ward was born in Groveton, TX in 1946. Developing as a disc jockey and Las Vegas performer, the smooth-voiced singer hit his stride with a half-dozen pop-tinged hits from 1977-1980, including remakes of Rhythm Of The Rain and A Lover’s Question.