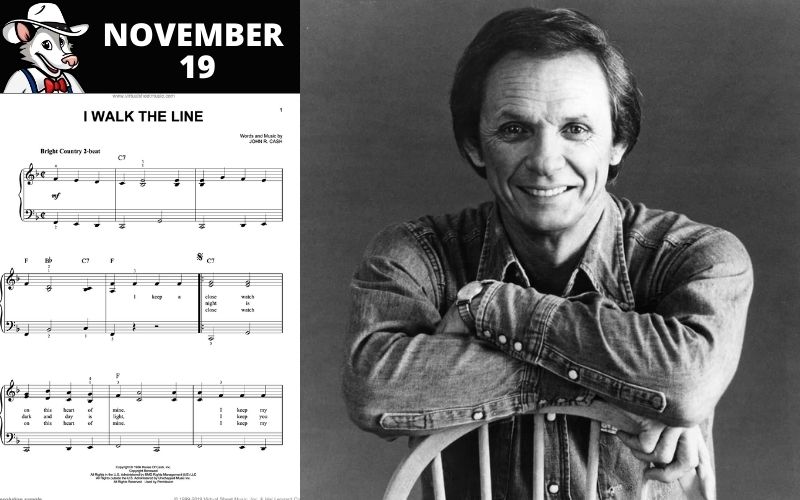 Johnny Cash wrote I Walk The Line in Gladewater, TX in 1955. He was backstage about 20 minutes prior to a remote broadcast of The Louisiana Hayride. Also appearing on the bill: Elvis Presley and Carl Perkins.

McGuinn, Hillman & Crosby renamed their band The Byrds in 1964. The group becomes an important link in the growth of country-rock, particularly through the 1968 album Sweetheart Of The Rodeo.

Roy Rogers and Dale Evans hosted the first broadcast of the Country Music Association awards in 1968. It was taped the previous month, and aired on NBC. Glen Campbell won Entertainer and Male Vocalist of the Year.

Cristy Lane recorded a pair of hits in 1979, One Day At A Time and Sweet Sexy Eyes, in an afternoon session at Nashville’s LSI Studio.

We lost songwriter Bobby Russell in 1992. He penned Bobby Goldsboro’s Honey, Roger Miller’s Little Green Apples and the Vicki Lawrence/Reba McEntire hit The Night The Lights Went Out In Georgia.

Naomi Judd rode the 63rd annual Santa Train on its 100-mile course through Appalachia in 2005. The trek began in Shelby, KY, and ended in Kingsport, TN.

Charlie Daniels was invited by Martina McBride to join the Grand Ole Opry during a concert at Nashville’s Ryman Auditorium in 2007. The invitation happened during the 11th annual Christmas For Kids benefit, featuring Montgomery Gentry, Taylor Swift, Chris Young and Rodney Atkins.

We lost Mel Tillis in 2017. A member of the Country Music Hall of Fame and Nashville Songwriters Hall of Fame, he earned the CMA’s Entertainer of the Year in 1976. The self-proclaimed stutterin’ boy had hits as an artist and as the writer of Detroit City and Ruby, Don’t Take Your Love To Town.

Gospel singer J.D. Sumner was born in Lakeland, FL in 1924. He helped create The Stamps Quartet, a gospel group that eventually backed Elvis Presley. You know Sumner’s voice when you hear it…he’s the one providing the signature closing bass note on The King’s Way Down.

Banjo player Dave Guard was born in San Francisco in 1934. He became a member of The Kingston Trio, a folk group that won the first country Grammy award, presented for the single Tom Dooley.

Dobro player Chad Jeffers was born in Kingsport, TN in 1975. He joined the alt country band Pinmonkey, nominated for an Academy of Country Music award in 2003. After leaving the group, he went on to play in the road bands of Keith Urban, Carrie Underwood and Jamie O’Neal.

Copyright 2020, 96.3 The Possum by Appalachian Radio Group .  All Rights Reserved.