In his fourth attempt at the song, Webb Pierce finally finished recording Slowly during an evening session in 1953 at Nashville’s Castle Studio. He also cut Even Tho that same day.

The Battle Of New Orleans won Song of the Year  for composer Jimmy Driftwood. It also took Best Country & Western Performance for Johnny Horton during the second annual Grammy Awards in 1959.

Johnny Cash recorded the political satire The One On The Right Is On The Left in Nashville at the Columbia Recording Studios in 1965.

Webb Pierce put his Nashville home on the market for $1.2 million in 1983. The house is recognized for its guitar-shaped pool and for the stream of tour buses that visit – much to the dismay of his neighbor, Ray Stevens. 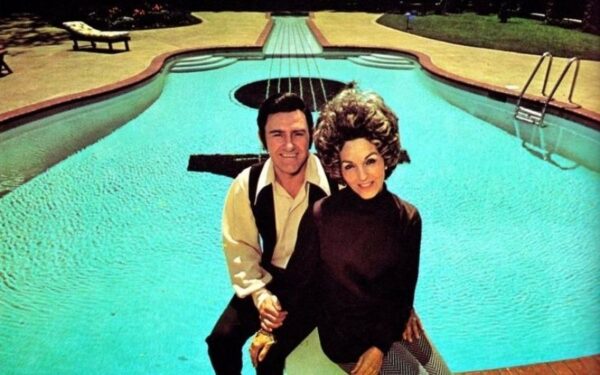 Joe Diffie recorded So Help Me Girl on November 29, 1994. It was the third single from Third Rock From the Sun. The song would eventually make it to #1 in Canada, but only reached #2 in the US – held back from the top spot by Brooks & Dunn’s Little Miss Honky Tonk.

November 29, 1994 was a good day for Alan Jackson too. His Don’t Rock The Jukebox album went triple-platinum that day.

We lost ex-Beatle George Harrison in 2001 to cancer. The Fab Four influenced numerous country artists, and several songs became country hits: Something, I Feel Fine and I Don’t Want To Spoil The Party.

Myrna Joy Brooks was born in Phoenix, AZ in 1941. Under the name Jody Miller, she gained her widest recognition for the Grammy-winning Queen Of The House, a 1965 answer to Roger Miller’s King Of The Road.