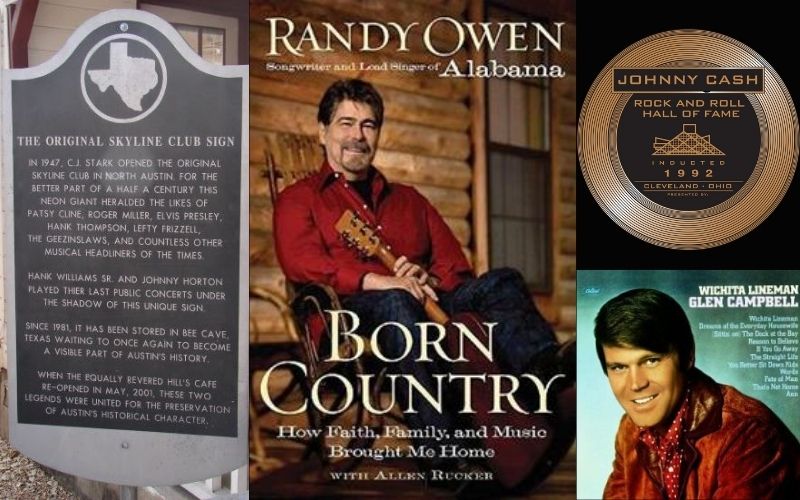 Dwight Eisenhower defeated Adlai Stevenson for president in 1952. Singer/songwriter Stuart Hamblen, running on the Prohibition ticket, finished fourth. So why are we talking about this on the Country Music Calendar? Because of Stevenson’s loss, Ernest Tubb lost $200 in a bet with Eddy Arnold. With inflation, if they had that bet today, it’d equal $1,964.38.

Johnny Horton performed in what proves to be his final show in 1960 at The Skyline Club in Austin, TX. The club also provided the setting for Hank Williams’ final concert. Horton was involved in a head-on collision the following day.

Hank Williams’ widow, Audrey Williams, died in her Nashville home in 1975. It was on the same day the IRS planned to repossess it.

Barbara Mandrell earns her first #1 country single in 1978 with Sleeping Single In A Double Bed.

Epic released Exile’s self-titled album in 1983, its first marketed as a country project.

Dolly Parton recorded Yellow Roses in 1988. Dolly wrote the song and  Ricky Skaggs co-produced it. It would become her 19th #1 single.

Sandy Brooks called husband Garth Brooks in Cape Girardeau, MO in 1989. She told him that she knew he’d been cheating and that she would leave if it continued. During that night’s show, he cried while singing If Tomorrow Never Comes and confessed to the crowd. They’d remain married until 2001.

Guitarist Phil Baugh died in Nashville in 1990. Winner of the Academy of Country Music’s first Top Guitarist award in 1966, his bent notes contributed to such recordings as Merle Haggard’s Swinging Doors and George Jones’ He Stopped Loving Her Today.

Hours before the start of a show in 1995, Steve Sanders quit The Oak Ridge Boys. In October, he had resigned but promised to stay until the end of the year. His exit paves the way for former Oak William Lee Golden to rejoin.

Songwriter Dale Noe died in Mesa, AZ in 2004. Among his credits were Wynn Stewart’s It’s Such A Pretty World Today and Jim Reeves’ posthumous hits Missing You and Angels Don’t Lie.

HarperOne published Born Country in 2008. The autobiography of Randy Owen was co-written with Allen Rucker.

Warner Bros. released the Kenny Rogers duet with Dolly Parton You Can’t Make Old Friends to radio in 2013. The song earned the pair a Grammy nomination for Best Country Duo/Group Performance. They lost to The Civil Wars for their song, From This Valley.

Kirk McGee was born in Tennessee’s Williamson County in 1899. Teaming with older sibling Sam McGee, the McGee Brothers provide guitar support for Uncle Dave Macon and become regulars on the Grand Ole Opry from the mid-1920s until Sam’s death in 1975.

Blues-rock singer Delbert McClinton was born in Lubbock, TX in 1940. Among his own credits, McClinton also teams with Tanya Tucker on the 1993 duet Tell Me About It and writes Emmylou Harris’ 1978 hit Two More Bottles Of Wine.

Van Stephenson was born in Hamilton, OH in 1953. He wrote Lee Greenwood’s You’ve Got A Good Love Comin’ and Restless Heart’s Bluest Eyes In Texas, and had a pop hit as an artist with Modern Day Delilah before joining the 1990s trio BlackHawk.

Kim Forester was born in Fort Oglethorpe, GA in 1960. She joined her siblings to form The Forester Sisters, whose thick, genetic harmonies, partially influenced by gospel music, create 15 hits in the late-1980s.