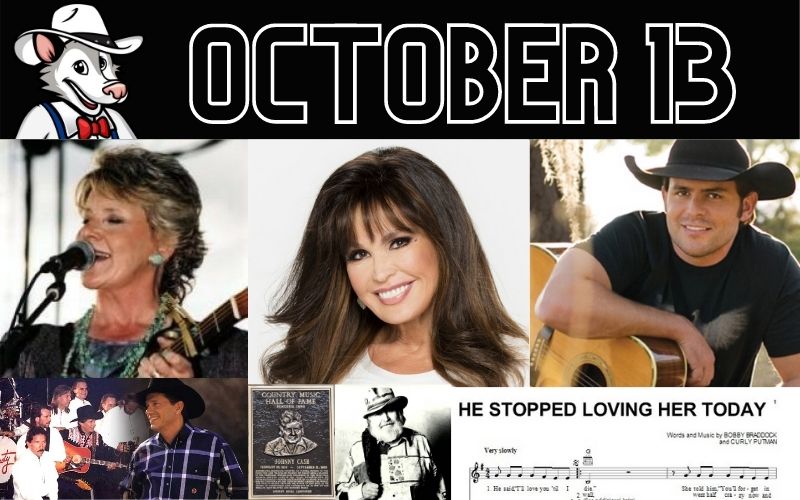 Faron Young made his first appearance on “The Louisiana Hayride” in 1952. The show was recorded at the Municipal Auditorium in Shreveport.

The Nashville Songwriters Hall Of Fame inducted Hank Cochran in 1974. His songwriting successes include Patsy Cline’s “I Fall To Pieces,” Mickey Gilley’s “That’s All That Matters” and Vern Gosdin’s “Set ‘Em Up Joe.” Dean Dillon, part of the 2020 Country Music Hall of Fame Class named Hank Cochran as one of his greatest inspirations.

Backstage at the Grand Ole Opry House in 1975, George Jones sees Tammy Wynette for the first time since their divorce. They were both in attendance for the Country Music Association awards. That wasn’t the only awkward thing that happened that night…Presenter Charlie Rich lit fire to the envelope as John Denver wins Entertainer of the Year. Denver also won Song of the Year with “Back Home Again”

Ace In The Hole plays its first date at the Cheatham Street Warehouse in San Marcos, TX in 1975. A fella in the band named George Strait would later emerge as a solo artist. The Ace In The Hole Band stayed with George and remained as his backing band.

In 1980 George Jones won twice at the 14th annual Country Music Association awards at Nashville’s Grand Ole Opry House. He earned Male Vocalist and Single of the Year for “He Stopped Loving Her Today,” which also wins Song of the Year. Also at the awards show, Johnny Cash, concert promoter Connie B. Gay and The Sons Of The Pioneers join the Country Music Hall of Fame.

In 1993 Capricorn released Kenny Chesney’s debut single, “Whatever It Takes.” The song made it to #59 on the Billboard Country Singles Chart.

In 1999 Johnny Rodriguez is acquitted of murder for shooting Israel Borrego, whom he mistook as a burglar, in his home the previous year. Read the full story here.

Pop songwriter Gerald Marks was born in Saginaw, MI in 1900. His best-known creation is “All Of Me,” recorded more than 2,000 times. Willie Nelson’s version becomes a country hit in 1978

Lacy J. Dalton was born in Bloomsburg, PA in 1946. The husky-throated singer wins the Academy of Country Music’s Top New Female award in 1980 on the way to such hits as “Takin’ It Easy,” “Black Coffee” and the songwriter anthem “16th Avenue”

Marie Osmond was born in Ogden, UT in 1959. She nets a 1973 country hit with “Paper Roses” as a teenager, joins her brother as a host of ABC’s “Donny & Marie” TV show, then makes a mid-’80s comeback as a country singer with “There’s No Stopping Your Heart” and a Dan Seals duet, “Meet Me In Montana”

Rhett Akins was born in Valdosta, GA in 1969. After three hits as an artist in the 1990s, he transitions into songwriting, composing Luke Bryan’s “I Don’t Want This Night To End,” Rodney Atkins’ “Take A Back Road,” Thomas Rhett’s “It Goes Like This” and Blake Shelton’s “Honey Bee,” among others.