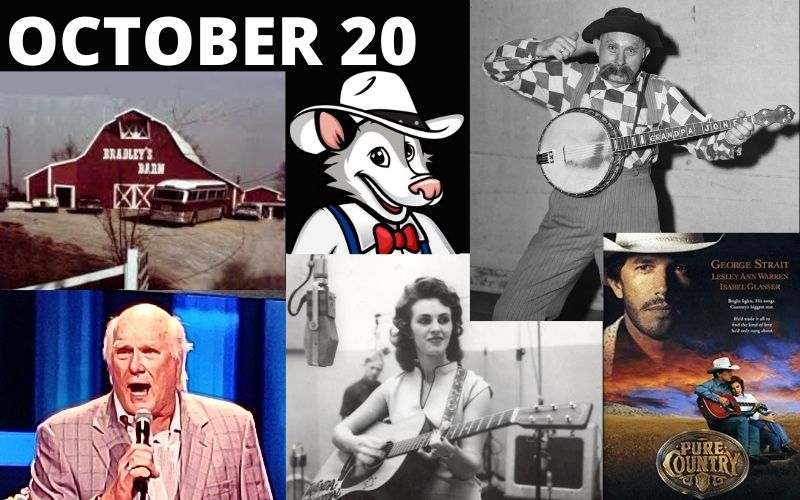 Lester Flatt & Earl Scruggs held their final session for Mercury Records in 1950. The event at the WDAE Studio in Tampa featured the recording of “Roll In My Sweet Baby’s Arms”

Hank Williams signed a movie deal with MGM Pictures in 1951. Legend has it that the contract was inked backstage at the Grand Ole Opry.

In 1958, Ray Price’s “City Lights” becomes the first song written by Bill Anderson to hit #1 on the Billboard country singles chart. Whisperin’ Bill would go on to become the first country songwriter to receive the BMI Icon Award. He was also the first country artist to host a network game show. He has written countless hits for himself and other artists over his lengthy career. It all started with “City Lights”

Jack Greene is a triple-winner in the inaugural Country Music Association awards in 1967. He won Male Vocalist and Album of the Year for “There Goes My Everything.” The title track claims Single of the Year and wins Song of the Year for songwriter Dallas Frazier.

Jerry Lee Lewis recorded “Once More With Feeling” in a late-night session at the Monument Studio in Nashville in 1969. The song was written the day before by Kris Kristofferson and Shel Silverstein.Oct 20, 1969

JMI released Don Williams’ first charted single, “The Shelter Of Your Eyes” in 1972.

On that same day in ‘72, Porter Wagoner & Dolly Parton re-sign with RCA as a duo.

Pittsburgh Steelers quarterback Terry Bradshaw signed with Mercury Records in 1975. Although his biggest success came on the field, he did gain a minor country hit the following year with his version of Hank Williams’ “I’m So Lonesome I Could Cry”

Bradley’s Barn caught fire in suburban Nashville in 1980. Built by record producer Owen Bradley in 1965, the recording studio had provided the setting for influential recordings by Conway Twitty, Loretta Lynn and Jack Greene, among others

We lost Merle Travis following a massive coronary in 1983. Peaking as an artist during the 1940s, he also wrote Tennessee Ernie Ford’s “Sixteen Tons,” was recognized as a stellar guitarist, and joined the Country Music Hall of Fame in 1977

“Pure Country” has its Nashville premiere in 1992, attended by Garth Brooks, Joe Diffie and Randy Travis, plus the movie’s star, George Strait

In a 2002 interview, Johnny Cash tells The Los Angeles Times he’s mellowed significantly: “We’ll go to Wal-Mart and I’ll get one of those electric carts and just race through the aisles. Imagine that being the highlight of your day”

Stuart Hamblen was born in Kellyville, TX in 1908. Recording country and gospel songs, he became a pioneering western singer on Los Angeles radio. With a career stretching from 1925 to the 1970s, his most familiar legacy is the hymn “It Is No Secret”

Songwriter Gerald Irby was born in New Braunfels, TX in 1917. His biggest success comes with “Drivin’ Nails In My Coffin,” a hit for both Ernest Tubb and Floyd Tillman. Irby also pens Bob Wills’ “Keeper Of My Heart”

Wanda Jackson was born in Maud, OK in 1937. Veering between country and rockabilly, she appeared on both the pop and country charts in the 1950s and ’60s, making waves with “Right Or Wrong,” “Let’s Have A Party” and “In The Middle Of A Heartache”