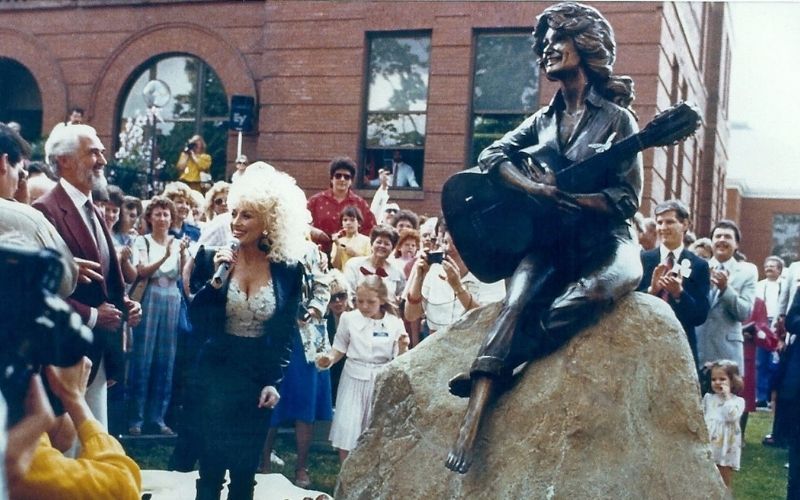 Sevier County holds the first Dolly Parton Day in 1967 as 7,000 people gather at the courthouse for a show that also features Porter Wagoner and Mel Tillis. Pictured above is the dedication of Dolly’s statue in Sevierville 20 years after that first Dolly Parton Day. Dolly told the people of Sevierville that the statue “makes me feel like you folks are proud of me, and I’ve always wanted you to be.”

It was a successful day for John Conlee in 1976. That day he recorded “Rose Colored Glasses” and “Backside Of Thirty” at Nashville’s Music City Recorders.

Johnny Cash sued Yashica Camera Corporation for $1 million in 1977. He accused the company of creating the impression he endorses their product. A commercial with a low-voiced man starts out, “Hello, I’m Johnny…” and fades to thunderous applause.

Merle Haggard married Leona Williams in 1978 at a ranch in Nevada. Among the bridesmaids is his ex-wife, Bonnie Owens. Rose Maddox and brother Fred Maddox perform.

In 1979 the Nashville Songwriters Hall Of Fame inducts Elsie McWilliams (“Blue Yodel”), Thomas A. Dorsey (“Peace In The Valley”), Joe South (“Rose Garden”) and The Louvin Brothers (“If I Could Only Win Your Love”)

“Songwriter,” starring Willie Nelson and Kris Kristofferson, opened in Nashville in 1984. Nelson sings “For The Good Times” in the film. Guests at the premiere include Chet Atkins, Faron Young, Rosanne Cash and Rodney Crowell. 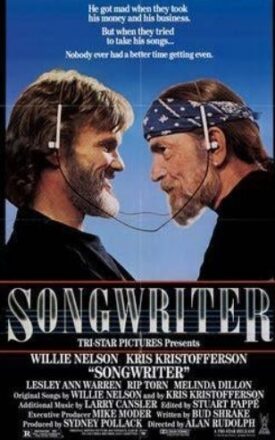 In 1984 the Nashville Songwriters Hall Of Fame inducts Hal David and Billy Sherrill. David’s credits include “To All The Girls I’ve Loved Before” and “It Was Almost Like A Song.” Sherrill wrote “Almost Persuaded” and “Stand By Your Man”

In 1990, the Nashville Songwriters Hall Of Fame inducts Jimmy Webb (“Wichita Lineman,” “Highwayman”) and Ted Harris (“The Hand That Rocks The Cradle”), plus Sue Brewer, noted for her humanitarian efforts for Nashville songwriters.

Daryle Singletary performs “Too Much Fun” at a rodeo in the plot of CBS-TV’s “Touched By An Angel” in 1995. That same night, Little Texas’ “Kick A Little” airs during a bar scene on the CBS military drama “JAG”

Johnny Rodriguez went on trial in 1999 in Uvalde, TX. He was charged with killing an acquaintance who he believed was a robber in his home in August 1998.

The Judds reunite for a nine-date mini-residency, titled Girls Night Out, at the Venetian in Las Vegas in 2015.

Uncle Dave Macon was born in Smart Station, TN in 1870. The singer, comedian and banjo player becomes an early star in country music through his membership in the Grand Ole Opry. He enters the Country Music Hall of Fame in 1966

Fiddler Gordon Terry was born in Decatur, AL in 1931. He racks up credits with Bill Monroe, Faron Young and Johnny Cash, and performs on a Bob Wills tribute album recorded by Merle Haggard. He also appears in the movie “Honkytonk Man”

Booking agent Buddy Lee was born in Brooklyn, NY in 1932. He established one of Nashville’s most successful agencies, Buddy Lee Attractions, associated with Garth Brooks, Tracy Lawrence, Marty Stuart and Jason Aldean, among others

Kieran Kane was born in Queens, NY in 1949. He had moderate commercial success as a solo artist in the early-1980s before joining with Jamie O’Hara to form The O’Kanes. In the 1990s, he co-founds Dead Reckoning Records, an artist-owned indie label.