While spending six months in a Roswell, New Mexico, jail for statutory rape, Lefty Frizzell writes “I Love You A Thousand Ways” for his wife, Alice in 1947. It also happened to be his little brother David’s birthday.

Tanya Tucker makes the cover of Rolling Stone in 1974 with the headline: “Hi, I’m Tanya Tucker, I’m 15, You’re Gonna Hear From Me” 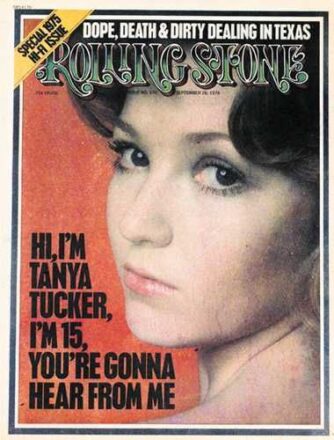 Simon & Schuster publishes Tammy Wynette’s autobiography, “Stand By Your Man,” co-written by Joan Dew in 1979. You can get your copy here:

Martin Robinson is born in Glendale, AZ in 1925. Under the name Marty Robbins, he brings a smooth style and confident swagger to country, mixing pop crossover material, western story songs and country ballads, ultimately landing in the Country Music Hall of Fame. He was known for his extra long sets on the Opry, here’s a fun Opry medly:

David Frizzell is born in El Dorado, AR in 1941. The younger brother of Lefty Frizzell, he adds a traditional country element to the genre in the early-1980s on his solo novelty hit “I’m Gonna Hire A Wino To Decorate Our Home” and on duets with Shelly West.

Lynn Anderson is born in Grand Forks, ND in 1947. The daughter of songwriters Liz and Casey Anderson, she achieves more than 15 hit singles from 1967-1983 with the million-selling “Rose Garden” emerging as her signature song. We first fell in love with her on the Lawrence Welk Show. Here’s her very first appearance in 1967.

Olivia Newton-John is born in Cambridge, England in 1948. Raised in Australia, the pop singer begins her career with country-tinged recordings, gaining her a Country Music Association award as Female Vocalist of the Year in 1974.

Martin Delray is born in Texarkana, AR in 1949. He garners a minor country hit in 1991 with a remake of Johnny Cash’s “Get Rhythm”

Carlene Carter is born in Nashville in 1955. The daughter of Carl Smith and June Carter, she develops an edgy brand of country that flirts with rockabilly, debuting in 1977. She attains her biggest commercial success in the early-’90s. Here’s Carlene discussing her country music heritage.

Doug Supernaw is born at St. Joseph Hospital in Bryan, TX in 1960. The rough-necked performer has a handful of successful singles in the 1990s, most notably “Reno” and “I Don’t Call Him Daddy.” We also love this one: