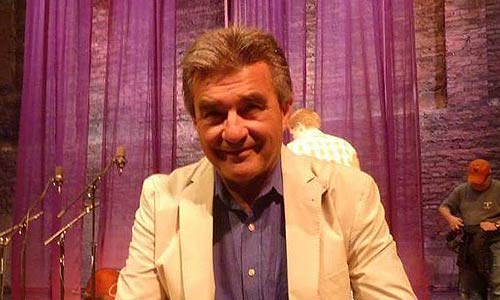 About The Tim White Bluegrass Show

The Tim White Bluegrass Show is a 2 Hour Syndicated Radio Program featuring the best in Bluegrass, Old-Time, and Comedy direct to you from the OFFICIAL Birthplace of Country Music Region, Bristol Virginia/Tennessee. The program is available to affiliate stations throughout the US. If your local station isn't carrying the show, please call them and tell them to visit our site and sign up.

Tim White left Roanoke, Virginia in 1974 and settled in east Tennessee, where he pursued his careers of artist, sign painter, and banjo picker. Though the artist was there from the start and the sign painter was a logical career outgrowth, the banjo picker was learned later in life. As he said one time, "It's amazing what one can learn when they don't watch TV."

Tim's interest in the musical heritage of the region, a region which stretched from Roanoke to Knoxville and cut a broad swath into neighboring states, led to his painting a mural on State Street in Bristol in 1986. This mural depicts the principal characters of the historic Bristol Sessions, which took place in Bristol, TN-VA in the summer of 1927.

Victor Recording Company talent scout and record producer Ralph Peer, who had recorded Ernest and Hattie Stoneman of Galax, VA for several years, came to the region to find new talent for his records. At this two week session, he was able to record for the first time the Carter Family from nearby Maces Spring, Virginia, and Jimmie Rodgers. This recording event grew commercial country music as we know it today. The influences of A.P., Sara, and Maybelle Carter, and Jimmie Rodgers are acknowledged by a wide variety of musicians worldwide.

The Birthplace of Country Music Mural became a local landmark and tourist draw that identified Bristol to the state, the country, and the world. It became a site for regular summertime Tuesday night pickin' sessions, where musicians could come and play their traditional and contemporary music, much as has been done on front porches and around store pot-bellied stoves for the last two centuries.

Tim is also the host of the PBS television concert series, Song of the Mountains. www.songofthemountains.org This popular program has been featured on over 180 PBS affiliates across America featuring bluegrass, old-time, Celtic, gospel, and Americana music. Song of the Mountains reaches over 21 million households and 52 million people annually across the nation. If your PBS affiliate does not carry Song of the Mountains please contact them to request the show. Information for requesting the program is on the website along with program schedule and merchandise information.

Tim's musicianship gained a following and he has fronted several bands over the past two decades, including Troublesome Hollow, The Beagles, and currently the VW Boys. The VW Boys perform music, magic, and comedy. www.vwboys.com Tim’s interest of recognizing, preserving and perpetuating the historic music of the area led to the recruitment of others of a like mind and organizing of the Appalachian Cultural Music Association. www.appalachianculturalmusic.org Tim currently serves as ACMA president and uses his many talents as an artist, businessman, musician, and radio announcer to further the aims of the ACMA. He has organized concerts and contributed his time and efforts to promote the music and the message. The ACMA helps to support the Mountain Music Museum, which Tim helped found, in 1999. The museum is dedicated to preserving the heritage of the music which was born in the Southern Appalachians.

As a public figure, artist, musician, and radio announcer, Tim White has unselfishly contributed time, effort, and energy to support and promote the music and the musicians of the region. Tim has been in radio since 1990. He has a syndicated radio program featuring bluegrass music, old-time music and comedy which airs in the U.S. and streams on the internet via many of his affiliates. He has one of the most popular Bluegrass radio programs in the Birthplace of Country Music Region "The Bluegrass Show" on WAXM (FM 93.5). He is on every Saturday from 9 am 'till 12 pm. He has a full slate of sponsors who support his program. To quote Tim, he says, "I'm truly a blessed man".